A first-century Christian, contemplating the future of the church on earth, might well have asked - How will the church fare when the apostles are no longer present to teach and guide her in person? How can sound doctrine, on which salvation depends, be preserved? And how can good order be maintained without the apostles to put it into effect? Part of the divine answer to these questions was the apostle Paul s first letter to Timothy. Paul wrote to instruct Timothy on the conduct of his ministry in Ephesus. But in the purpose of God his instructions were to remain permanently valid for the church and its ministers till the end of time.In this concise Bible study, John Cook guides the reader through Paul s letter, pointing out its relevance to twenty-first-century Christians and churches. He shows that behind all the detailed guidance Paul passes on to Timothy and to us lie his amazement and gratitude that Christ Jesus came into the world to save sinners (1 Tim. 1.15), and his fervent desire that the church Christ came to save should remain a pillar and buttress of truth (1 Tim. 3.15) until the appearing of the Saviour in glory.The Let s Study series seeks to combine explanation and application. The aim is exposition of Scripture written in the language of a friend, seated alongside you with an open Bible. Let's Study Series Editor - Sinclair B. Ferguson, Senior Minister, First Presbyterian Church, Columbia, South Carolina, and Professor of Systematic Theology, Redeemer Seminary, Dallas, Texas.Editorial ReviewsAbout the AuthorW. John Cook tutored New Testament Studies in the South Wales Bible College, Barry, and at the Evangelical Theological College of Wales. He is now involved in pastoral ministry in Wilberforce Evangelical Church, Barry. 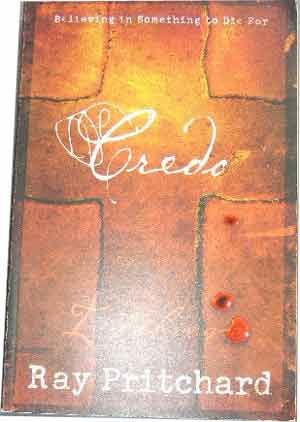 Credo Believing in Something to Die for